The Key of Cthulhu: Sculpture and Master

Hello there.  I'd like to discuss sculpture, passion and elder gods.  Well, we can discuss the particularities of elder gods later, but for now, I'd like to cover my passion, sculpture.   I've had a love of H.P. Lovecraft's works since I was a young boy, and in actuality he was a strong inspiration for me to get into the creature concept and creation field that I am in now.  I wanted to try and bring to life, give personality to, the indescribable monsters and gods he wrote about.  I didn't know it at the time, but his writing is alot like sculpture.  You only have a brief time to get the reader/viewer interested in your creation.  You have to grab them, let them look deep into the soul of your universe, and see life.  With sculpting, at least with the part of it that I love so much, it's in the eyes and expression, that people lock onto and feel the life of the character.  Hence my fascination with Cthulhu.  He is one of the most iconic creations of Lovecraft, besides the Necronomicon, and being a big Dungeons and Dragon gamer in my youth, he embodied my love of horror and fantasy, all wrapped up in one rather large, disgusting package!  I didn't want to turn him into a blobular mass, or something that people couldn't relate to, however.  I'll save that for another sculpture I'm working on at the moment.  No, with this one I wanted to have people relate, so that meant I had to inject some humanity into his design.  Since people will be viewing it, I wanted people to relate, therefore I needed to have some depth to his appearance.  Since I couldn't have people relate to the tentacles, the only thing left, since there was no more of a human element to the expressions and anatomy left undisturbed by the alien/octopus hybrid, were the eyes.  They were they key.  I wanted to put mystery, alien intelligence and thought into those eyes, while keeping the whole design flowing in the right direction.
OK, here are some of my thoughts about the Key.  I mentioned in my previous post some of my thought process going into the design of Cthulhu.  I'd like to post some of the process photos here to give some balance to the thoughts, so you can see some of steps that I had to take to get to the finished statue.  Starting off, I sculpted the tentacles with a free flowing feel, but they weren't originally made to be molded, due to undercuts and the way the mold would have to open in order to be cast properly.  Once the decision was made to make the sculpture a cast, I had to compromise some of my artistic leanings for practical choices, and the main one was the shape and direction of the tentacles.  Here is what the sculpture looked like before I changed the tentacles.
So, a decision had to be made about what to do next.  I decided that I would make a master copy, and then go from there.  I could still make a cast of the sculpture with the tentacles as-is, but I could not mass produce them that way.  What I did was cut off a few of the offending tentacles, do a brush-up silicone mold, and then re-assemble the final cast, and decide from there.  I was going to do that anyway due to some finish work I could easily do in resin vs. clay.  Here are the lines where I decided to cut some of the main tentacles.
Here is the master of the Key, just out of the mold with the reattached tentacles, painted white, originally, just to utilize the auto body primer I had on hand.   The tentacles are still in the formation of the original sculpture, and you can see the temporary pins holding in the small side tentacles. 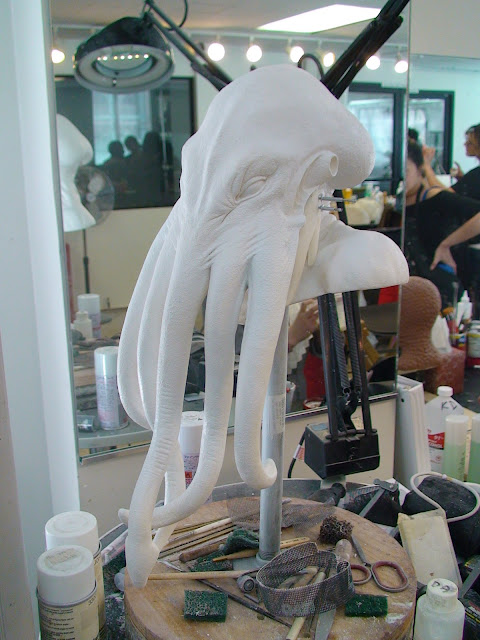 Here is the master cast, with the tentacles reattached and on the pedestal for the base sculpt.  I sprayed black primer on top of the white, which helped me see how far I was sanding down with the steel wool.  This is after I changed the tentacular positioning as well.  No longer does the one tentacle wrap under the main one, and I adjusted a few more to allow for easier molding. 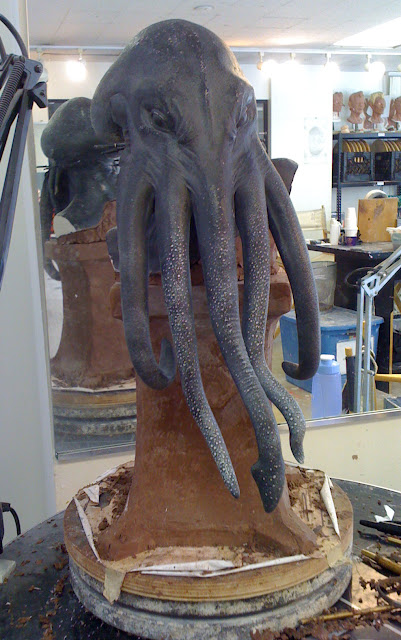 This is the official blog of JoynerStudio.com. I will be posting up to date information and images about different projects I work on. More behind the scenes and procedural, as well as my thoughts on various subjects. Dry sounding, I know!